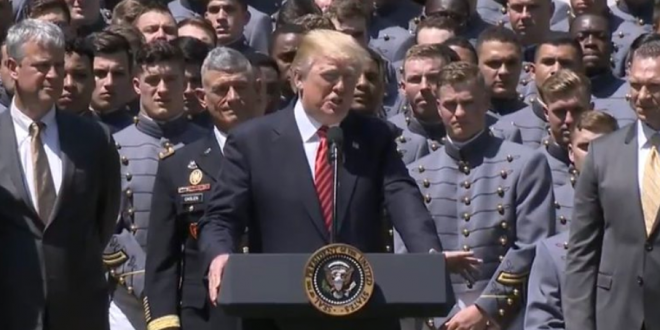 President Trump mused again Tuesday about adding a new branch of the military — a Space Force — and this time made clear he is thinking seriously about it. Trump aired his thoughts during a ceremony at the White House, where he presented the Commander-in-Chief’s Trophy to the U.S. Military Academy’s Black Knights football team for its victories over Navy and Air Force. Surrounded by West Point cadets in the Rose Garden, Trump talked up the mission they have ahead.

“You will be part of the five proud branches of the United States Armed Forces: Army, Navy, Marines, Air Force and the Coast Guard,” Trump said. After a short pause he continued: “And we’re actually thinking of a sixth, and that would be the Space Force. Does that make sense? Because we’re getting very big in space, both militarily and for other reasons. And we are seriously thinking of the Space Force.”

Trump to the Army football team: “You will be part of the 5 proud branches of the U.S. armed forces — Army, Navy, Marines, Air Force & the Coast Guard. We’re actually thinking of a 6th — the Space Force. Does that make sense?…. We’re getting very big in space.” pic.twitter.com/cZNgJeX1F1