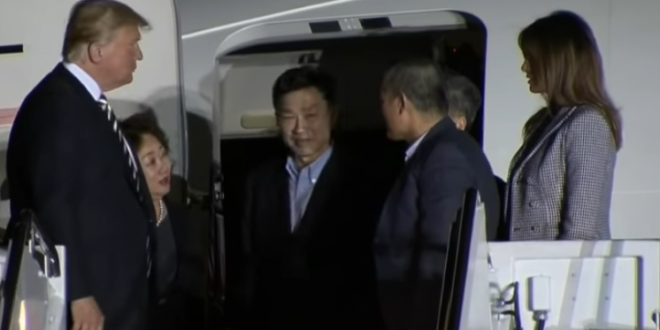 Three American men who had been held by North Korea touched U.S. soil once again early Thursday, where they were met by President Trump, who has hailed his diplomacy with North Korean leader Kim Jong Un for winning their freedom.

The trio — Kim Dong Chul, Kim Hak Song and Tony Kim – all held on charges of espionage, arrived at Andrews Air Force Base just outside of Washington, D.C. at about 2:40 a.m. ET. Their plane taxied to the meeting area, where a giant American flag was suspended over the tarmac.

Shortly after the president and first lady went aboard the plane carrying the freed detainees, they emerged with the president, smiling and waving to cheers and applause from military personnel at the base. “I want to thank Kim Jong Un,” Trump said on the tarmac.

On behalf of the American people, WELCOME HOME! pic.twitter.com/hISaCI95CB