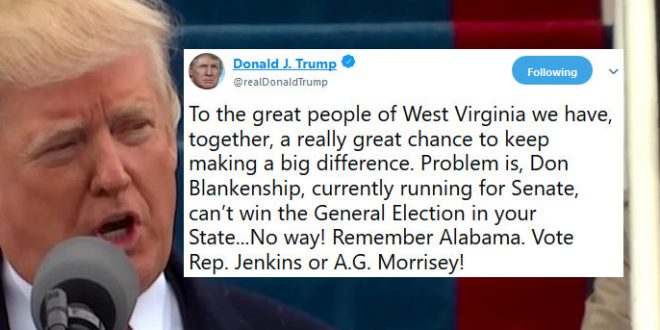 President Trump made an extraordinary appeal Monday for Republican primary voters to oppose former coal baron Don Blankenship in the looming West Virginia Senate primary, saying he “can’t win” in the general election. Trump, in an early-morning tweet, instead urged voters to pick one of his two rivals, Attorney General Patrick Morrisey or Rep. Evan Jenkins.

After the Upper Big Branch mining disaster of April 2010, in which 29 people died, the former Massey Energy chief executive Don Blankenship was found guilty of wilfully violating mine safety and health standards. Sentenced to 12 months in prison, he was released in May last year. On Tuesday, he could win the Republican nomination for US Senate in West Virginia. The millionaire is in the middle of a chaotic three-man race, with the US congressman Evan Jenkins and the state attorney general, Patrick Morrisey. The winner will take on an incumbent Democrat, Joe Manchin, in a state Donald Trump won by nearly 40 points.

To the great people of West Virginia we have, together, a really great chance to keep making a big difference. Problem is, Don Blankenship, currently running for Senate, can’t win the General Election in your State…No way! Remember Alabama. Vote Rep. Jenkins or A.G. Morrisey!