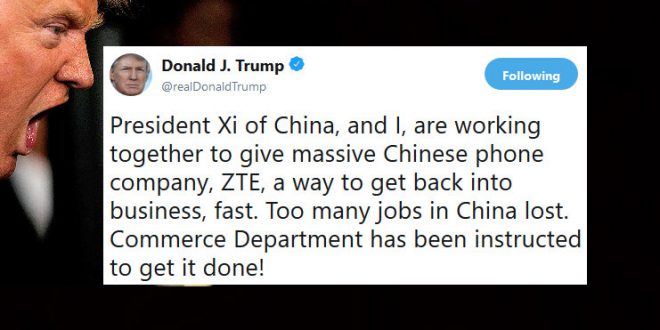 President Donald Trump’s crackdown on trade claimed a massive victim this week, as the Chinese tech giant ZTE shut down most of its operations.

The Commerce Department recently banned the sale of US-made parts to ZTE, crippling its operations and leading to a shutdown of its factories. In a statement Wednesday, ZTE said that “the major operating activities of the company have ceased.”

ZTE, the second-largest telecom-equipment firm in China, pulled in almost $17 billion in revenue last year. The department’s move was the result of an investigation into ZTE’s sales to North Korea and Iran that the US said violated existing sanctions against those countries.

President Xi of China, and I, are working together to give massive Chinese phone company, ZTE, a way to get back into business, fast. Too many jobs in China lost. Commerce Department has been instructed to get it done!

Previous Serial Adulterer Celebrates Mothers Then Goes Golfing
Next White House Spox On Staffer’s Mocking Of McCain’s Cancer: I Don’t Know If That Comment Was Even Made