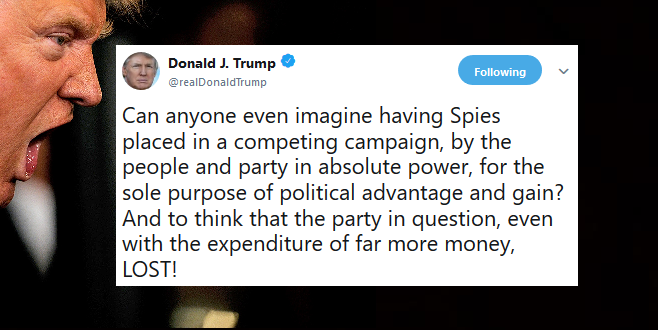 Trump Unleashes Yet Another “Spygate” Tweetstorm

President Trump raised once again on Friday the claim that the FBI improperly spied on his presidential campaign, suggesting that the bureau used a top-secret informant to surveil his team long before it began investigating Russian meddling in the 2016 election.

The tweets were Trump’s latest suggesting that the FBI planted a mole within his campaign to spy on his team under the guise that his associates were under the influence of Moscow. No evidence has emerged that the FBI spied on Trump’s campaign.

The Democrats are now alluding to the the concept that having an Informant placed in an opposing party’s campaign is different than having a Spy, as illegal as that may be. But what about an “Informant” who is paid a fortune and who “sets up” way earlier than the Russian Hoax?

Can anyone even imagine having Spies placed in a competing campaign, by the people and party in absolute power, for the sole purpose of political advantage and gain? And to think that the party in question, even with the expenditure of far more money, LOST!

“Everyone knows there was a Spy, and in fact the people who were involved in the Spying are admitting that there was a Spy…Widespread Spying involving multiple people.” Mollie Hemingway, The Federalist Senior Editor But the corrupt Mainstream Media hates this monster story!

Democrats are so obviously rooting against us in our negotiations with North Korea. Just like they are coming to the defense of MS 13 thugs, saying that they are individuals & must be nurtured, or asking to end your big Tax Cuts & raise your taxes instead. Dems have lost touch!