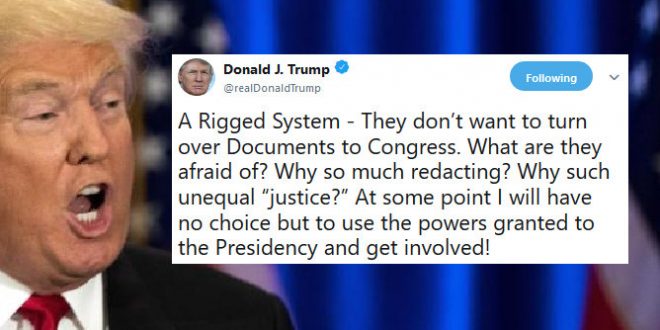 Trump Threatens To “Get Involved” With DOJ

Glorious Leader has spent his entire morning freaking out:

President Trump has once again weighed in on Republican concerns that the DOJ is not providing documents in a timely manner. It’s gotten to the point where some Republicans have begun drafting articles of impeachment against Deputy AG Rod Rosenstein as a “last resort.” Rosenstein fired back yesterday by saying the DOJ will not be “extorted.” And now the President himself is getting into this ongoing battle.

A Rigged System – They don’t want to turn over Documents to Congress. What are they afraid of? Why so much redacting? Why such unequal “justice?” At some point I will have no choice but to use the powers granted to the Presidency and get involved!

This is a chilling reminder that the tradition of Justice Department independence is just that — a tradition. It’s not enshrined in law. Trump has power, and he can use it. https://t.co/SYfZxKcID7

Still, no real signs here that POTUS knows of any “powers granted to the Presidency” that might permit him to “get involved.” Odds of bluffing high. https://t.co/SooQ0soIMU

POTUS warns that he will “have no choice” but to “get involved” in DOJ document production to Congress. NB: The documents GOP lawmakers are seeking are related to the investigation into the Trump campaign and Russia. https://t.co/ash6mNwXtG