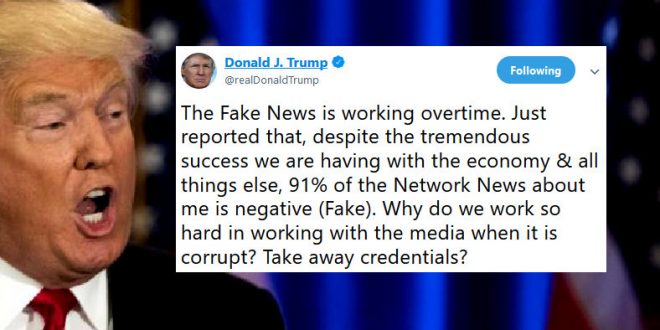 President Trump on Wednesday threatened to revoke press credentials from the “fake news” networks after a report study showed 91 percent of Trump’s coverage in the press is negative. Fox & Friends reported Wednesday morning on a Media Research Center report that showed 91 percent of the coverage surrounding Trump in the first four months of 2018 has been negative, despite a CNN poll that most voters’ approval of Trump has been increasing.

The Media Research Center was founded by right wing extremist Brent Bozell, who is most infamous here for calling President Obama a “skinny ghetto crackhead” during an appearance on Fox News.

The Fake News is working overtime. Just reported that, despite the tremendous success we are having with the economy & all things else, 91% of the Network News about me is negative (Fake). Why do we work so hard in working with the media when it is corrupt? Take away credentials?