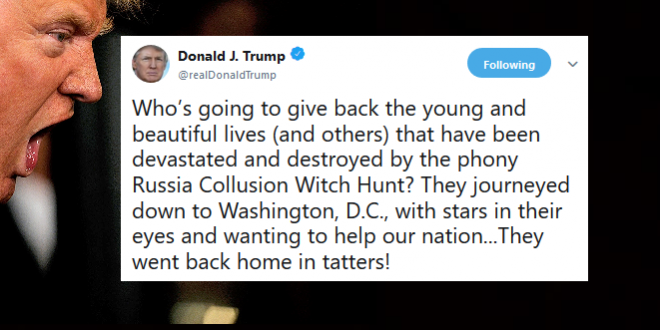 President Donald Trump tweeted Sunday that the Russia probe has “devastated and destroyed” the reputations of people, continuing his weekend Twitter assault against the Robert Mueller investigation into Russian interference in the 2016 election.

It’s unclear who Trump is referring to when he says individuals have “went back home in tatters.” A score of former campaign aides have reportedly met with Mueller’s team along with congressional investigators — racking up significant legal bills in the process.

The president has attacked the investigation throughout Memorial Day weekend, returning to some of his favorite line of attacks including the political affiliations of Mueller’s team and claiming that the question of Russian interference was made up by Democrats after losing the 2016 campaign.

Who’s going to give back the young and beautiful lives (and others) that have been devastated and destroyed by the phony Russia Collusion Witch Hunt? They journeyed down to Washington, D.C., with stars in their eyes and wanting to help our nation…They went back home in tatters!