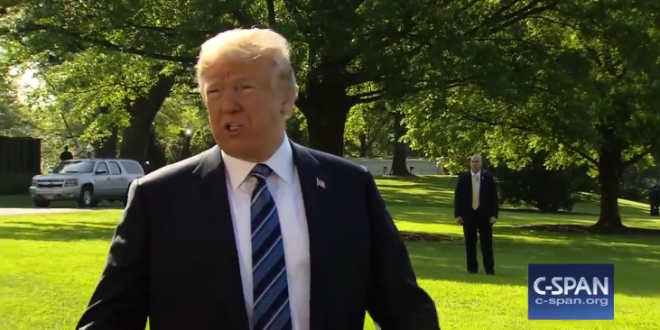 While departing the White House on Friday, President Trump told pool reporters that his administration is still speaking with North Korea, and indicated that the peace summit he canceled yesterday could still take place. Trump canceled the summit, originally scheduled for June 12, in a letter addressed to North Korean leader Kim Jong Unm yesterday. Trump even indicated the summit could still take place by June 12.

NEW: Pres. Trump says “we’re talking” to North Korea now; “it was a very nice statement they put out; we’ll see what happens.”

“It could even be the 12th…They very much want to do it, we’d like to do it. We’re going to see what happens.” https://t.co/Fqtb5bUxbX pic.twitter.com/hS1jTAGi00

Asked if NK is playing games? @realdonaldtrump responded “Everybody plays games… you know that…”

Very good news to receive the warm and productive statement from North Korea. We will soon see where it will lead, hopefully to long and enduring prosperity and peace. Only time (and talent) will tell!

President Trump on #NorthKorea: “We’re going to see what happens. We’re talking to them now. It was a very nice statement they put out. We’ll see what happens.” He also says, “Everybody plays games.” pic.twitter.com/94ZEn0KbCA