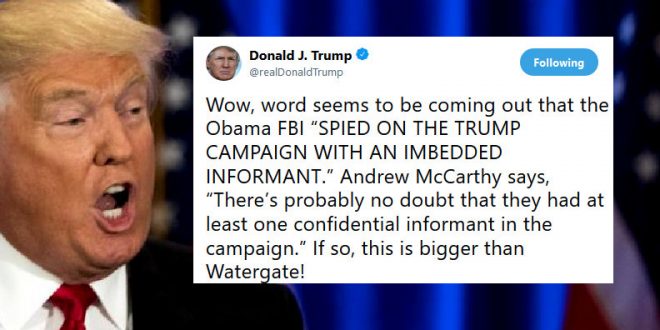 President Trump on Thursday touted a recent report saying the FBI under former President Obama spied on the Trump campaign during the 2016 presidential election, saying that it could be “bigger than Watergate.”

This is not the first time Trump has suggested the Obama administration spied on his campaign during the election. Trump accused Obama in a tweet last year of wiretapping Trump Tower shortly before he won the election.

Congratulations America, we are now into the second year of the greatest Witch Hunt in American History…and there is still No Collusion and No Obstruction. The only Collusion was that done by Democrats who were unable to win an Election despite the spending of far more money!

Wow, word seems to be coming out that the Obama FBI “SPIED ON THE TRUMP CAMPAIGN WITH AN IMBEDDED INFORMANT.” Andrew McCarthy says, “There’s probably no doubt that they had at least one confidential informant in the campaign.” If so, this is bigger than Watergate!