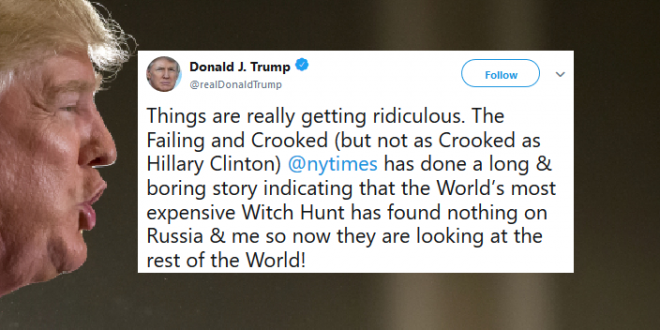 Here’s what today’s rant is apparently about:

Three months before the 2016 election, a small group gathered at Trump Tower to meet with Donald Trump Jr., the president’s eldest son. One was an Israeli specialist in social media manipulation. Another was an emissary for two wealthy Arab princes. The third was a Republican donor with a controversial past in the Middle East as a private security contractor.

The meeting was convened primarily to offer help to the Trump team, and it forged relationships between the men and Trump insiders that would develop over the coming months — past the election and well into President Trump’s first year in office, according to several people with knowledge of their encounters.

Erik Prince, the private security contractor and the former head of Blackwater, arranged the meeting, which took place on Aug. 3, 2016. The emissary, George Nader, told Donald Trump Jr. that the princes who led Saudi Arabia and the United Arab Emirates were eager to help his father win election as president.

Things are really getting ridiculous. The Failing and Crooked (but not as Crooked as Hillary Clinton) @nytimes has done a long & boring story indicating that the World’s most expensive Witch Hunt has found nothing on Russia & me so now they are looking at the rest of the World!

….At what point does this soon to be $20,000,000 Witch Hunt, composed of 13 Angry and Heavily Conflicted Democrats and two people who have worked for Obama for 8 years, STOP! They have found no Collussion with Russia, No Obstruction, but they aren’t looking at the corruption…

…in the Hillary Clinton Campaign where she deleted 33,000 Emails, got $145,000,000 while Secretary of State, paid McCabes wife $700,000 (and got off the FBI hook along with Terry M) and so much more. Republicans and real Americans should start getting tough on this Scam.

Now that the Witch Hunt has given up on Russia and is looking at the rest of the World, they should easily be able to take it into the Mid-Term Elections where they can put some hurt on the Republican Party. Don’t worry about Dems FISA Abuse, missing Emails or Fraudulent Dossier!

What ever happened to the Server, at the center of so much Corruption, that the Democratic National Committee REFUSED to hand over to the hard charging (except in the case of Democrats) FBI? They broke into homes & offices early in the morning, but were afraid to take the Server?