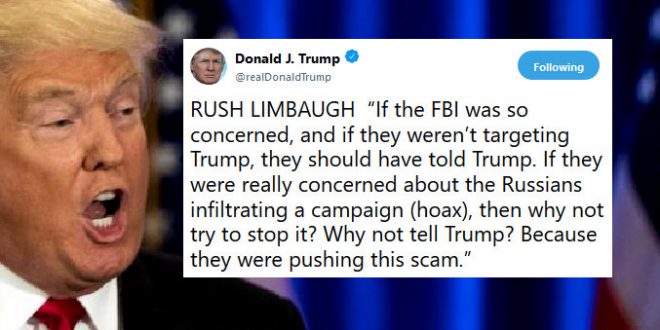 The FBI did warn him but the gaslighting continues:

President Trump quotes conservative radio host Rush Limbaugh in a tweet on Thursday, saying the FBI should have told Trump they embedded an informant in his campaign. The president in recent weeks has claimed without evidence that the FBI planted a mole in his campaign and sought to spy on his team for political purposes. The informant met with three of Trump’s campaign advisers in 2016 in the early months of the counterintelligence investigation into Russia’s role in the election.

RUSH LIMBAUGH “If the FBI was so concerned, and if they weren’t targeting Trump, they should have told Trump. If they were really concerned about the Russians infiltrating a campaign (hoax), then why not try to stop it? Why not tell Trump? Because they were pushing this scam.”

“The recusal of Jeff Sessions was an unforced betrayal of the President of the United States.” JOE DIGENOVA, former U.S. Attorney.

The soon to be released book, “The Russia Hoax, The Illicit Scheme To Clear Hillary Clinton And Frame Donald Trump,” written by Gregg Jarrett, looks like a real deal big hit. The Phony Witch Hunt will be opened up for the world to see! Out in 5 weeks.

Previous CHATTER AWAY: Overnight Open Thread
Next Romney: In 2016 I Voted For My Wife For President