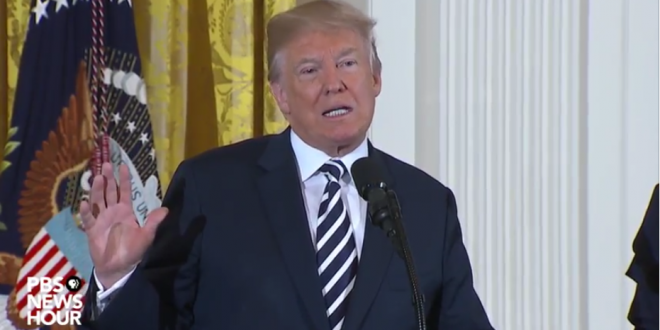 For the millionth time we see he’ll lie about anything:

President Trump on Wednesday inaccurately claimed numerous times that military personnel had not received a pay raise in 10 years, though the Pentagon has enacted raises every year for the past decade. “We just approved $700 billion for our military so we’re going to be having the best equipment ever and next year $716 billion. … That also includes raises for our military. First time in 10 years,” Trump said while hosting military mothers and spouses at the White House.

“Today I’m hear to tell you that my administration is totally committed to every family that serves in the United States armed forces. That is what earlier this year I was proud to sign that big pay raise that I’ve already spoken about,” Trump continued. “And I am proud of it and I guess [there will] be others too. Would you like one sooner, or do you want to wait another 10 years?” he added.

Trump just said military pay will be raised for the first time in 10 years. The Defense Department says it’s gone up every year. https://t.co/NnKQoJIPc3 pic.twitter.com/Co4jK8oZCW