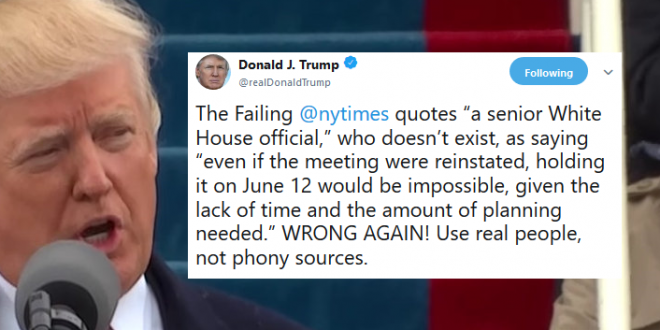 How many thousands of lies is he up to now?

Reporters hit Twitter on Saturday to call out President Trump for claiming that a senior White House official quoted in reports “doesn’t exist.”

The comments come in response to Trump’s tweet attacking The New York Times for quoting an anonymous White House official saying that the now-canceled summit between Trump and North Korean leader Kim Jong Un is unlikely to occur on the originally planned date.

Many reporters turned to Twitter to defend the source, tweeting that the official in question does indeed exist and held an in-person background briefing about the summit on Thursday.

The Failing @nytimes quotes “a senior White House official,” who doesn’t exist, as saying “even if the meeting were reinstated, holding it on June 12 would be impossible, given the lack of time and the amount of planning needed.” WRONG AGAIN! Use real people, not phony sources.

The reason that this official was not named in our story is that the White House press office insisted that its briefing — for hundreds of reporters — was on background. Best way to alleviate the President’s concern about anonymous sources would be for WH to name the official. https://t.co/dTKNTbGzJR

Trump told two demonstrable falsehoods this AM, one about his administration’s policy of separating undocumented immigrant kids inclu infants from their parents, which he tried to claim wasn’t his own policy. The other was falsely claiming his own aide didn’t give a bg briefing.

Imagine being the WH background briefer who led this briefing, who now has his boss – the president of the US – saying he/she doesn’t exist. https://t.co/6tYHxp3ZFK

I mean, every reporter on the call knows who this official was, and this official exists. And we all heard the official say it. https://t.co/iEiTEpHeyb

The official is Matt Pottinger who serves on the National Security Council. He briefed dozens of reporters on background. https://t.co/5FUP7t8nYQ

FYI, Matthew Pottinger is NSC Senior Director for Asian Affairs, @POTUS. Ask for a transcript of the briefing, done in the White House with the press office’s approval. https://t.co/ivnZD7mliB

4. I've obtained audio of the WH press briefing. You can hear Raj Shah, Deputy Press Secretary, introduce Pottinger (along with the terms – which are standard) and then Pottinger makes the statement that POTUS says was never made. Lots of reporters in briefing room and on phone. pic.twitter.com/2gEYkRSyTv