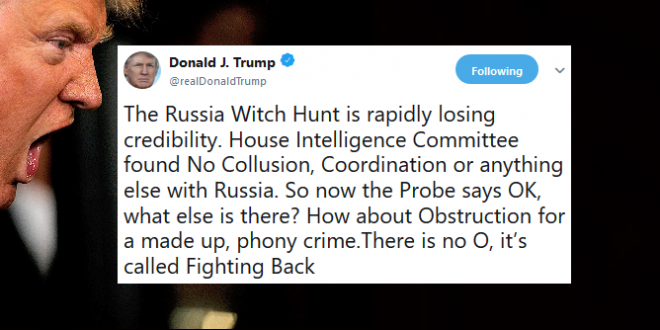 President Trump on Monday criticized the suggestion that he has obstructed justice in the Russia investigation, saying he is simply “fighting back.” Trump’s tweet comes after a federal judge last week pushed back against prosecutors handling the case of former Trump campaign chairman Paul Manafort. Trump has repeatedly referring to the probe into Russian election meddling and any potential ties between Trump campaign staff members and the Kremlin as a “witch hunt.”

President Trump issued a legal threat to Special Counsel Robert Mueller’s investigative team in a Monday tweet, telling the “13 Angry Democrats” on the team to “just wait ‘till the Courts get to see your unrevealed Conflicts of Interest!”

Reality check: While 13 members of Mueller’s team have previously registered as Democrats, Mueller himself is a registered Republican. The other four investigators in the probe have no affiliation, per the Washington Post.

The Russia Witch Hunt is rapidly losing credibility. House Intelligence Committee found No Collusion, Coordination or anything else with Russia. So now the Probe says OK, what else is there? How about Obstruction for a made up, phony crime.There is no O, it’s called Fighting Back

The 13 Angry Democrats in charge of the Russian Witch Hunt are starting to find out that there is a Court System in place that actually protects people from injustice…and just wait ‘till the Courts get to see your unrevealed Conflicts of Interest!