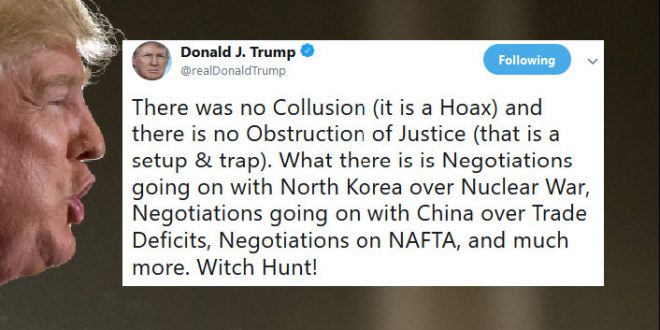 President Trump attacked the ongoing special counsel investigation into possible collusion between his campaign and Russia as well as the possibility of obstruction of justice charges in a tweet Wednesday morning. Trump has sought to allay accusations of both collusion and obstruction of justice over Twitter in recent months, despite Robert Mueller’s continuing investigation into both areas as well as his own statements to NBC’s Lester Holt last year stating that the Russia investigation was a factor in Comey’s firing.

Maybe the best way to end this whole mess if for Mueller to should say that ‘only billionaires collude with Russia’, then Trump, in a desperate attempt to want to be viewed as a billionaire, will admit to collusion.

Previous State TV Praises Kanye West: Good For Him [VIDEO]
Next Boy Scouts To Drop “Boy” From Their Name