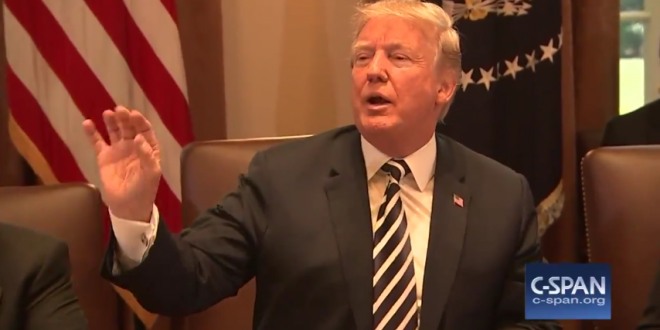 Trump: Everybody Thinks I Deserve The Nobel [VIDEO]

President Trump said Thursday that “everyone thinks” he deserves the Nobel Peace Prize, after weeks of suggestions from some that he should be honored for his diplomatic efforts on the Korean Peninsula.

“Everyone thinks so, but I would never say it,” Trump said when asked by a reporter in the White House if he thinks he should win the prestigious award.

Does Pres. Trump deserve the Nobel Prize? “Everyone thinks so, but I would never say it,” Pres. Trump says.

“The prize I want is victory for the world.” https://t.co/CFdzczE0fE pic.twitter.com/uqMlsth1UY

Previous NRA To Lose Insurance Program After State Rules It Provides Coverage For “Acts Of Intentional Wrongdoing”
Next Swiss Drug Giant Novartis: Actually We Paid Cohen $1.2M For Obamacare Advice He Was “Unable” To Give