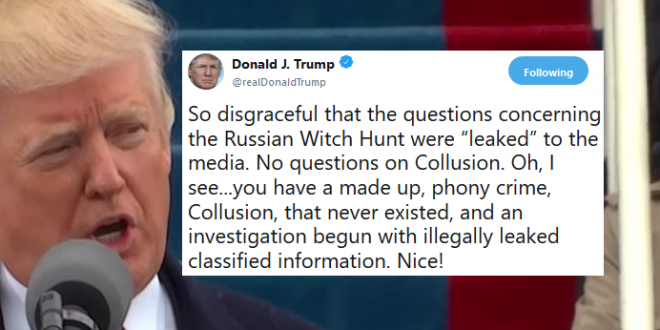 President Donald Trump on Tuesday slammed the disclosure of special counsel Robert Mueller’s questions for him, calling the leak “disgraceful.”

Mueller is interested in asking Trump a variety of questions related to the 2016 campaign and people from Trump’s personal life, business interactions and administration, according to Mueller’s list of questions for Trump obtained and reported on by The New York Times.

Some pundits are wondering if Trump’s team leaked the questions themselves to test the public’s reaction.

So disgraceful that the questions concerning the Russian Witch Hunt were “leaked” to the media. No questions on Collusion. Oh, I see…you have a made up, phony crime, Collusion, that never existed, and an investigation begun with illegally leaked classified information. Nice!

Previous Catholic Cardinal To Stand Trial For Sexual Abuse, Highest Ranked Vatican Official Ever Charged [VIDEO]
Next Sean Hannity Blasts “Full Of Crap” NYT Over Mueller Leak: Put This In Your Fireplace And Burn It [VIDEO]