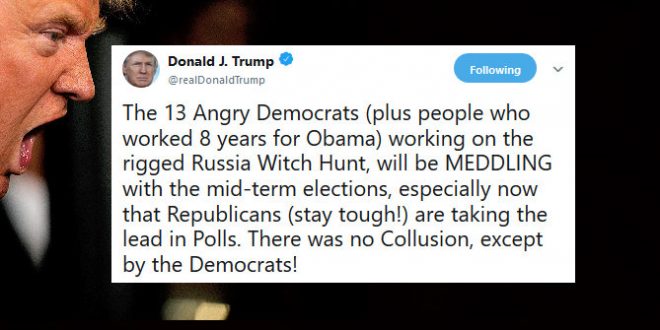 Trump: Democrats Plan To “Meddle” With The Midterms

President Trump suggested on Tuesday that special counsel Robert Mueller’s team of investigators was planning to meddle in the 2018 midterm elections, and urged Republican lawmakers to “stay tough” in the coming months.

Trump’s tweet was the latest in a series of posts lashing out at investigators – whom he has dubbed the “13 angry Democrats” – examining possible collusion between his presidential campaign and Russia in the 2016 election.

The 13 Angry Democrats (plus people who worked 8 years for Obama) working on the rigged Russia Witch Hunt, will be MEDDLING with the mid-term elections, especially now that Republicans (stay tough!) are taking the lead in Polls. There was no Collusion, except by the Democrats!

“This investigation involved far more surveillance than we ever had any idea about. It wasn’t just a wiretap against a campaign aide…it was secretly gathering information on the Trump Campaign…people call that Spying…this is unprecedented and scandalous.” Mollie Hemingway

Why aren’t the 13 Angry and heavily conflicted Democrats investigating the totally Crooked Campaign of totally Crooked Hillary Clinton. It’s a Rigged Witch Hunt, that’s why! Ask them if they enjoyed her after election celebration!

Previous CHATTER AWAY: Overnight Open Thread
Next All Starbucks To Close Today For Anti-Bias Training