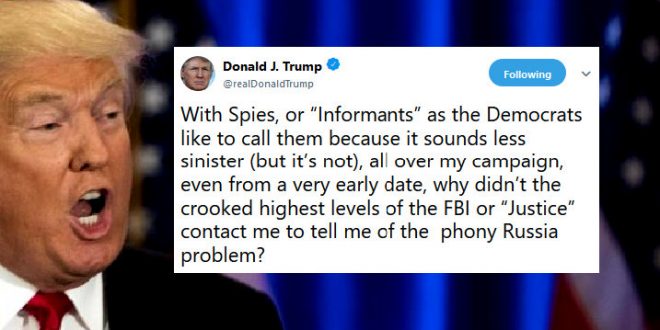 Even as some Republicans have suggested it may not be entirely accurate, President Trump is standing by his “SpyGate” claim. He also tweeted this afternoon that the FBI and/or DOJ never contacted him about this “phony Russia problem.”

However, NBC News reported late last year that “in the weeks after he became the Republican nominee on July 19, 2016, Donald Trump was warned that foreign adversaries, including Russia, would probably try to spy on and infiltrate his campaign.”

With Spies, or “Informants” as the Democrats like to call them because it sounds less sinister (but it’s not), all over my campaign, even from a very early date, why didn’t the crooked highest levels of the FBI or “Justice” contact me to tell me of the phony Russia problem?

This whole Russia Probe is Rigged. Just an excuse as to why the Dems and Crooked Hillary lost the Election and States that haven’t been lost in decades. 13 Angry Democrats, and all Dems if you include the people who worked for Obama for 8 years. #SPYGATE & CONFLICTS OF INTEREST!

When will the 13 Angry Democrats (& those who worked for President O), reveal their disqualifying Conflicts of Interest? It’s been a long time now! Will they be indelibly written into the Report along with the fact that the only Collusion is with the Dems, Justice, FBI & Russia?