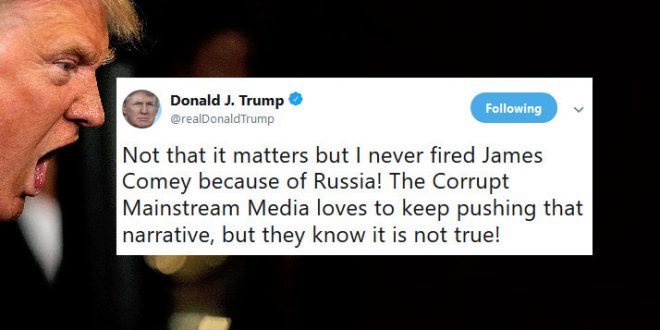 President Donald Trump, amidst a frenzied spurt of tweets Thursday morning, issued one in which he rejected allegations he fired former FBI director James Comey because of the Russia investigation, which remains a core pillar of the argument he obstructed justice.

Trump told NBC’s Lester Holt in May 2017: “And in fact when I decided to just do it, I said to myself, I said ‘you know, this Russia thing with Trump and Russia is a made-up story, it’s an excuse by the Democrats for having lost an election that they should have won’.”

Trump later told Russian officials in the Oval Office the firing of Comey eased pressure on him from the Russia probe. “I just fired the head of the F.B.I. He was crazy, a real nut job,” Trump told the Russians. “I faced great pressure because of Russia. That’s taken off.”

Not that it matters but I never fired James Comey because of Russia! The Corrupt Mainstream Media loves to keep pushing that narrative, but they know it is not true!

The corrupt Mainstream Media is working overtime not to mention the infiltration of people, Spies (Informants), into my campaign! Surveillance much?

Trump now claims that he did not fire James Comey because of Russia. That is a lie. Here’s the video of him admitting the opposite. This is dangerously Orwellian gaslighting aimed at degrading the concept of objective truth. pic.twitter.com/g9BEQXWgSK

Not only did Trump obviously admit he fired Comey over Russia to Lester Holt, but it was such a disastrous moment for him that he hasn’t done a single interview with a non-friendly TV reporter in the more than a year since.

This is believable if and only if you ignore that video of someone that looks remarkably like Donald Trump telling Lester Holt that fired Comey because of Russia https://t.co/SZ6u8fzSek

Previous Roseanne Barr Hints She May Fight Cancellation
Next Dr. Stabby’s New Deputy Chief Of Staff Is Son Of His “Closest Friend” Once Convicted Of Health Care Fraud