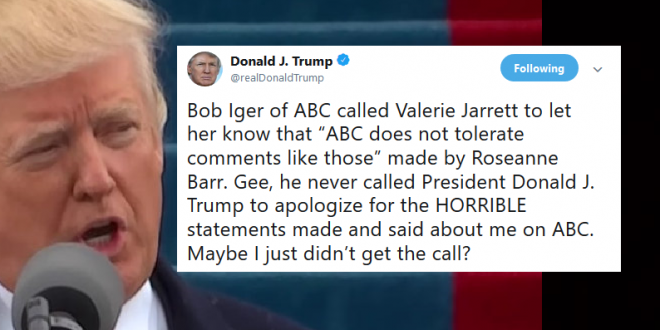 President Trump has finally weighed in on Roseanne Barr and has decided the person most worthy of condemnation here is Disney CEO Bob Iger. No, seriously.

Yes, after Barr’s show was cancelled because of her racist comment about Valerie Jarrett, Jarrett revealed that she received a call from Disney CEO Bob Iger. Iger himself tweeted yesterday that it was the “right thing” to do.

And the President of the United States’ first reaction here is to be upset online that the CEO of the Walt Disney Company did not call him.

Bob Iger of ABC called Valerie Jarrett to let her know that “ABC does not tolerate comments like those” made by Roseanne Barr. Gee, he never called President Donald J. Trump to apologize for the HORRIBLE statements made and said about me on ABC. Maybe I just didn’t get the call?

From Channing Dungey, President of ABC Entertainment: “Roseanne’s Twitter statement is abhorrent, repugnant and inconsistent with our values, and we have decided to cancel her show.”
There was only one thing to do here, and that was the right thing.