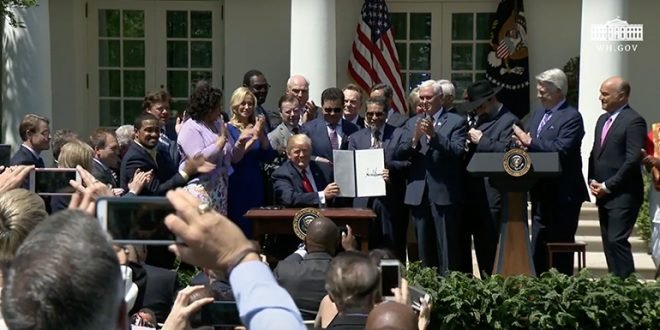 After eight back-breaking years, you can’t blame people for being skeptical about Donald Trump’s promise to pull religious liberty out of Obama’s trash heap. After all, most Christians had emerged from the last two terms like veterans of a war, bruised and traumatized. For the first time, they’d seen an American president turn the full force of government on his own people — Catholic nuns, family businesses, even his military. Undoing that damage would be difficult, but not — as we know now — impossible.

Now, a year and a half into an administration that runs to our Christian heritage — not away from it — today is a celebration. Under President Trump, the National Day of Prayer isn’t a just 24-hour cease fire in the government’s war on faith — but the acknowledgement of a year-round culture change, where religion and freedom matter. In sharp contrast to the previous administration, President Trump is committed to protecting and promoting religious freedom 365 days year. As he said today, “We must cherish our spiritual foundation” and the actions of this administration back it up.

At today’s Rose Garden ceremony, I was one of the dozens of faith leaders on hand to witness the latest proof of this president’s sincerity: the kick-off of the White House Faith and Opportunity Initiative. By executive order, President Trump took the last two administration’s attempts at faith-based outreach and turned it into a powerful and expanded agent of inclusive change. The new office, which will report directly to the White House, won’t be a symbolic gesture or a pretext for pet projects, but a commitment to ensure the ability of individuals of faith to be at home in every U.S. agency.

Perkins can be seen in the far left of the photo above. During the ceremony Trump singled out his “spiritual advisor” Paula White for praise. Reminders about her are below.

PREVIOUSLY ON JMG: Paula White announces “cancer busting” summer crusade in which she will “evaporate tumors” with the power of Jesus. Paula White demands that followers donate one month’s pay or suffer God’s consequences. Paula White recalls the time Obama threw the baby Jesus out of the White House. Paula White’s husband claims he wrote Journey’s smash hit Don’t Stop Believin’ as a tribute to Jesus. Paula White claims demons are attacking Trump because they fear his SCOTUS nominations. Paula White claims that when you oppose Trump, you are opposing “the hand of God.”