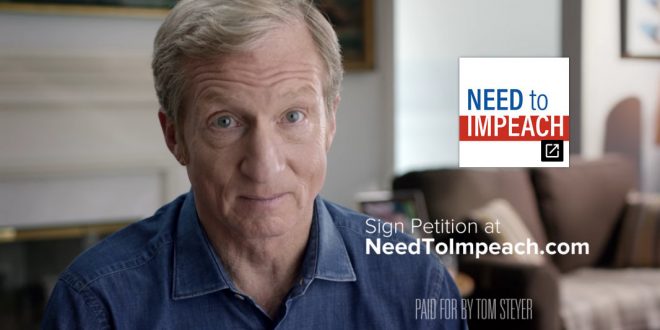 Tom Steyer: Democrats Like Pelosi Are “Normalizing” Trump By Declining To Back His Calls For Impeachment

Tom Steyer says the Democrats telling him to call off his impeachment crusade are like those who told civil rights activists to be patient, and says Nancy Pelosi and others holding back on calling for impeachment are “normalizing” Donald Trump’s presidency.

Steyer doesn’t care that Democratic leaders are worried that he could blow their chance at winning the House by talking up impeachment around the country and in his TV ads—though he argues he’s actually helping Democrats. He says he’s the only person willing to tell the truth. And the thing about a self-made billionaire with nothing to lose: it’s hard for anyone to convince him he might be wrong, or to get him to stop.

Steyer believes he’s lighting up the votes that the Democrats need to flip the House, despite Pelosi’s pushback in both public and private. In a phone call late last fall, the House minority leader urged Steyer to pull the money he was putting into pro-impeachment TV ads and instead spend it on tanking the Republican tax bill.

Hit the link for audio of Steyer’s remarks.

Previous Trump: The North Korea Summit May Be Back On
Next Roseanne Barr Goes FULL Crazy Racist