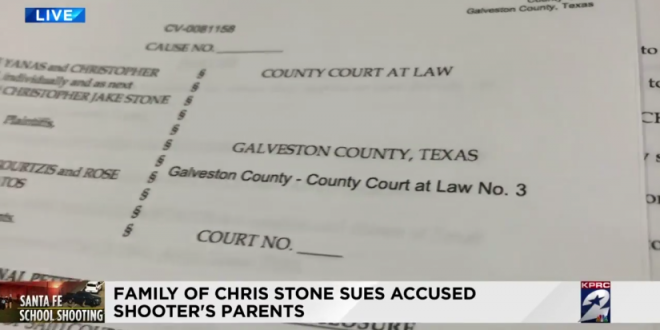 The family of one of the students killed in a Texas high school shooting filed a lawsuit against the alleged gunman’s parents, claiming the shooter’s father didn’t properly secure the weapons and were negligent in entrusting him with firearms.

Authorities charged Dimitrios Pagourtzis, a 17-year-old student Santa Fe High School, with capital murder in the May 18 attack that killed eight students and two substitute teachers. Investigators said Pagourtzis used a shotgun and pistol belonging to his father that had been kept in a closet.

Christopher Stone and Rosie Yanas, whose son Chris Stone, 17, was killed, filed a lawsuit in Galveston County on Thursday. Stone’s funeral was Friday. The lawsuit also argued that Pagourtzis’ parents didn’t obtain mental health counseling for their son and didn’t warn the public about his “dangerous propensities.”

Previous CHATTER AWAY: Overnight Open Thread
Next Spanish Police Provide FBI With Wiretaps Of Russian “Godfather” That Met With Junior At NRA Convention