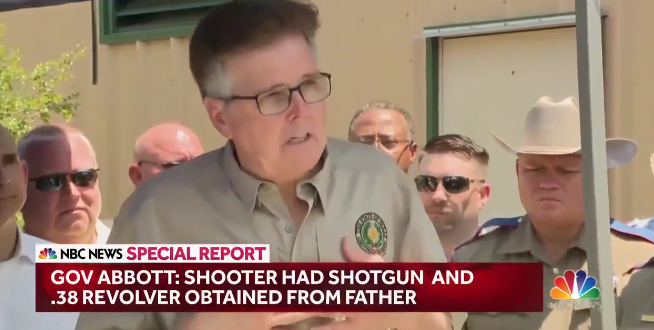 TEXAS: GOP Lt. Governor Dan Patrick Blames Schools For Having Too Many Entrances And Exits [VIDEO]

Far-right Texas Lt. Gov. Dan Patrick reacted to the mass shooting in his home state by blaming schools for having too many entrances and exits.

“We may need to harden our schools,” he said. “There aren’t enough people to put a guard at every one.”

Patrick, perhaps obviously, is a favorite of the NRA and once appeared on Dana Loesch’s show to declare that he’d rather see his state lose billions in federal funding than “surrender on transgender bathrooms.”

Texas Lt. Gov. Dan Patrick: “This is not acceptable in the state of Texas or in this country. This must end, and we must do everything we can. We can’t protect every parking lot and every stadium and every building, but we can sure do better.” https://t.co/RKzmCQIVNi pic.twitter.com/pvhvphrBn4

Texas Lt. Gov. Dan Patrick says there are too many entrances and exits to schools, and that is why shootings are able to happen. “Had there been one single entrance possibly for every student, maybe he would have been stopped.”

Now this idiot Lt Gov Dan Patrick is saying there’s too many entrances to the school.

“If it had only one entrance this could’ve been stopped.”

Has this dickhead ever heard of a thing called fire?#GunControl #SantaFe