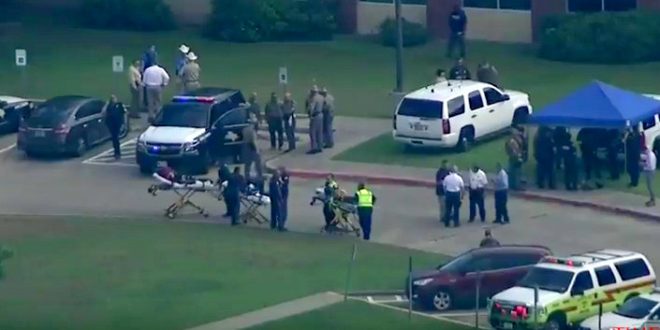 An active shooter at a Texas high school Friday prompted a lockdown and law enforcement are still on scene. A dispatcher at the Santa Fe Police Department told the Caller-Times officers were still on the scene. Galveston County Sheriff’s Office, Houston police and SWAT also responded. Several ambulances are there.

School district officials released a statement saying there was an active shooter at Santa Fe High School and the school remains on lock down. It’s still unclear whether that shooter has been taken into custody.

Federal and county officials tell KHOU 11 News multiple students were killed and an officer was wounded when a shooter opened fire inside Santa Fe High School. The school is located about 30 miles southeast of Houston. An assistant principal confirms the suspect, believed to be a student, is now in custody. The exact number of victims has not yet been confirmed.

NEW: "What our local affiliate is reporting that CBS News has yet to confirm but this is out of the local affiliate, multiple fatalities at the school. One police officer also wounded" in shooting incident at Texas High School pic.twitter.com/3iz8ZxDtaQ