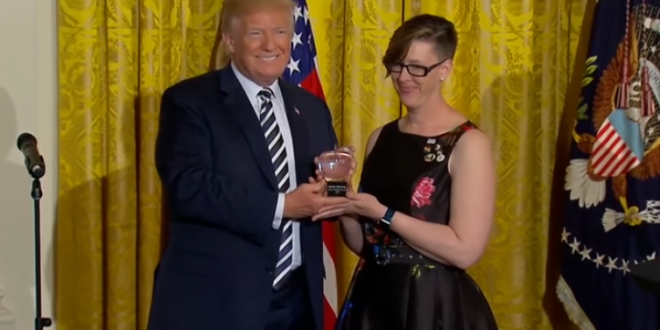 A teacher who leads a classroom for teenage refugees staged a silent protest by wearing several overtly political badges while receiving an award from Donald Trump at the White House. Mandy Manning works at the Newcomer Center at Joel E Ferris High School in Spokane, Washington, which specialises in English language development for new refugees and immigrant students.

Trump presented her with the National Teacher of the Year award in the East Room and praised her “incredible devotion”. The US president said: “Teachers like Mandy play a vital role in the wellbeing of our children, the strength of our communities and the success of our nation.”

Manning wore six badges on her black dress. According to a pooled report, they included one with a poster for the Women’s March that followed Trump’s inauguration, one that said “Trans Equality Now” and one in the shape of an apple with a rainbow.

.@realDonaldTrump awards the 2018 National Teacher of the Year to Mandy Manning, an English and math teacher who teaches refugee and immigrant students in Spokane, Wash. during a ceremony in the East Room of the White House. pic.twitter.com/tonyMaUv4t

President Trump just presented Washington’s Mandy Manning with the National Teacher of the Year award. He said she’s from “Spo-kane,” and said she teaches math and English at Ferris High, but didn’t mention that it’s in the school’s Newcomer Center for immigrants and refugees. pic.twitter.com/E93RWXOamp