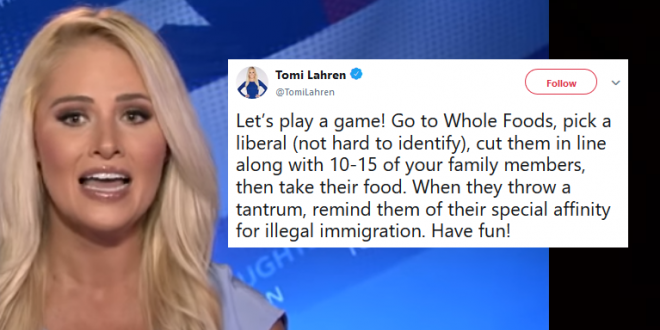 Fox News contributor Tomi Lahren was slammed over the weekend for remarks she made about immigrants. “You don’t just come into this country with low skills, low education, not understanding the language and come into our country because someone says it makes them feel nice,” she said during a segment on “Watters’ World” Saturday. “That’s not what this country is based on.” Lahren’s observation is at odds with the country’s history of immigration and the words of the poem engraved on the Statue of Liberty, which literally reads: “Give me your tired, your poor, your huddled masses yearning to breathe free.”

Let’s play a game! Go to Whole Foods, pick a liberal (not hard to identify), cut them in line along with 10-15 of your family members, then take their food. When they throw a tantrum, remind them of their special affinity for illegal immigration. Have fun!

I’d trade Xenophobic Rage Barbie for a hard working immigrant any day of the week and twice on Sundays. Contributing less than nothing to this country, she exists only to make lazy white supremacists “with low skills, low education, [barely] understanding the language” feel nice.

and wear a diaper to show them how silly they look https://t.co/C8Od88CE2t

Going out of your way to be horrible to normal people who don’t live and breathe politics to own the libs https://t.co/2mENYR6DTQ

Let’s play a game! It’s called “Ignore Tomi Lahren” and we can play it until the end of time and I’m pretty sure everyone would enjoy playing it.

Your grandpa was indicted for forging his immigration papers. https://t.co/JKWWOP2g5E

Immigrant-hating @TomiLahren is descended from a man who illegally forged his immigration papers. #irony https://t.co/OqOTpMie0u

Previous Ukrainian Politician To Testify Before Mueller Grand Jury On Meeting With Michael Cohen About Crimean Plan
Next CHATTER AWAY: Overnight Open Thread