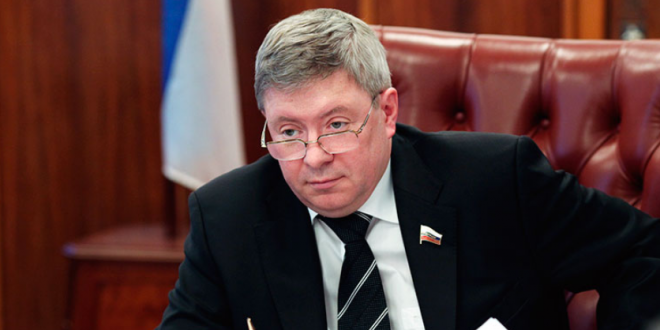 The FBI has obtained secret wiretaps collected by Spanish police of conversations involving Alexander Torshin [photo], a deputy governor of Russia’s Central Bank who has forged close ties with U.S. lawmakers and the National Rifle Association, that led to a meeting with Donald Trump Jr. during the gun lobby’s annual convention in Louisville, Ky., in May 2016, a top Spanish prosecutor said Friday.

José Grinda, who has spearheaded investigations into Spanish organized crime, said that bureau officials in recent months requested and were provided transcripts of wiretapped conversations between Torshin and Alexander Romanov, a convicted Russian money launderer. On the wiretaps, Romanov refers to Torshin as “El Padrino,” the godfather.

“Just a few months ago, the wiretaps of these telephone conversations were given to the FBI,” Grinda said in response to a question from Yahoo News during a talk he gave at the Hudson Institute, a conservative think tank in Washington. Asked if he was concerned about Torshin’s meetings with Donald Trump Jr. and other American political figures, Grinda replied: “Mr. Trump’s son should be concerned.”