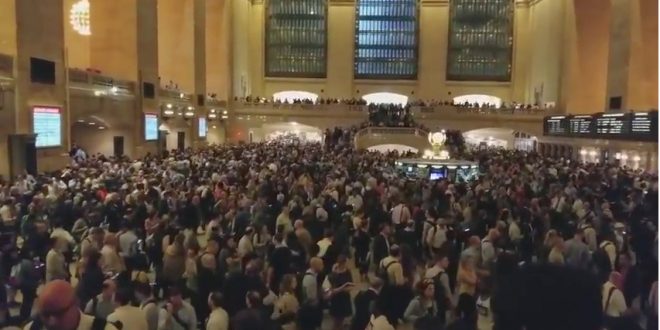 Today’s severe thunderstorm happened right during the evening commute. The high winds downed trees, causing delays along the 1, 2, 3, 4, 5, and 6 lines and prompted the MTA to suspend Metro-North service on the Hudson, Harlem, and New Haven lines. In fact, the MTA even temporarily closed down entrances to Grand Central terminal to prevent overcrowding.

The MTA’s statement read, “As a result of downed trees across the northern suburbs affecting all rail lines, Metro-North Railroad has suspended service on the Harlem Line, Hudson Line and New Haven Line until further notice. To prevent overcrowding of Grand Central Terminal, the Terminal’s entrances are being closed temporarily. Customers are asked not to enter Grand Central Terminal until train service can be restored.” If you wanted to see the chaos that an announcement like “All train service in and out of Grand Central is delayed indefinitely” causes #NYC #GrandCentral @MetroNorth pic.twitter.com/uUNVGHqEDy

@NYCTSubway Hey this is the situation under ground at Times Square. Please respond. What is up? @ny1 @WNBC @WCBSTV pic.twitter.com/xYbrhqciSW