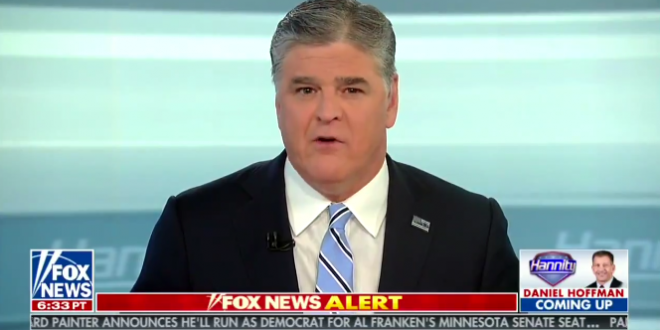 Sean Hannity Blasts “Full Of Crap” NYT Over Mueller Leak: Put This In Your Fireplace And Burn It [VIDEO]

Under-fire Fox News anchor Sean Hannity attacked the New York Times over its story on a list of questions the Mueller special counsel wants President Donald Trump to answer, dismissing the newspaper as “full of crap.”

“I am told by my sources tonight that The New York Times is full of crap,” Hannity said on his show during a discussion with Fox News contributor Sara Carter. “That a lot of those questions are not the questions that the special counsel is asking.”

He also held up the list of questions and said “if this is successful, this is America becoming Venezuela,” before concluding: “These New York Times questions, you could use it to burn in your fireplace tonight… half of these questions are dumb anyway.”

Sean Hannity completely freaks out about NYT reporting Mueller's questions: "Put it in your fireplace and burn it — because we have sources — half these questions are dumb anyway" pic.twitter.com/en3YQcUHum

Hmm. @SeanHannity just now: "I am told by my sources tonight that the NYT is full of crap. That a lot of those questions are NOT the questions that the special counsel is asking." His guest called it "disinformation."

Previous Trump Erupts Over “Disgraceful” Mueller Leak
Next Tony Perkins: If Bars Can Refuse To Serve Trump Fans, Christians Should Be Able To Turn Away Gay Customers