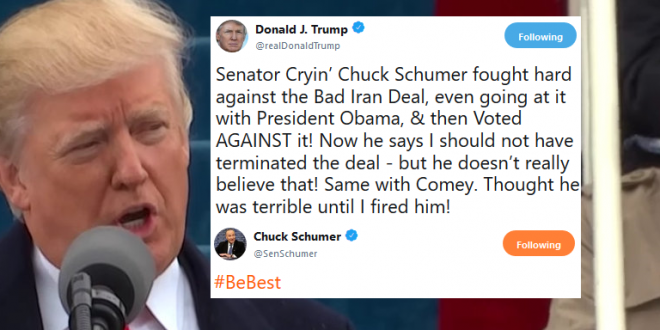 Senate Minority Leader Charles Schumer (D-N.Y) trolled President Trump on Twitter on Thursday with the hashtag for first lady Melania Trump’s new positive social wellness campaign. Schumer’s comeback was a dig at Melania Trump’s new initiative, which is meant to “encourage positive social, emotional, and physical habits” among children and their well-being online. The first lady has sparked criticism for speaking out against cyber-bullying while her husband frequently attacks others online.

Senator Cryin’ Chuck Schumer fought hard against the Bad Iran Deal, even going at it with President Obama, & then Voted AGAINST it! Now he says I should not have terminated the deal – but he doesn’t really believe that! Same with Comey. Thought he was terrible until I fired him!

Previous Trump: I’ll Meet With Kim In Singapore On June 12th
Next Convicted Felon Oliver North: The NRA Is The Victim Of “Civil Terrorism” Worse Than During Jim Crow Era