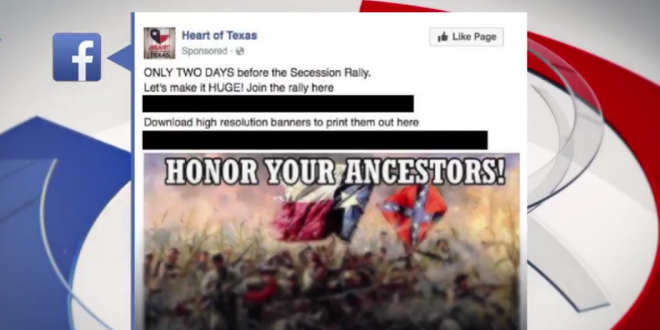 The Russian company charged with orchestrating a wide-ranging effort to meddle in the 2016 presidential election overwhelmingly focused its barrage of social media advertising on what is arguably America’s rawest political division: race.

The roughly 3,500 Facebook ads were created by the Russian-based Internet Research Agency, which is at the center of Special Counsel Robert Mueller’s February indictment of 13 Russians and three companies seeking to influence the election.

While some ads focused on topics as banal as business promotion or Pokémon, the company consistently promoted ads designed to inflame race-related tensions. Some dealt with race directly; others dealt with issues fraught with racial and religious baggage such as ads focused on protests over policing, the debate over a wall on the U.S. border with Mexico and relationships with the Muslim community.

Above all, the 2016, Russian ad campaign sought to incite racial tension in the US. Is that what the are doing in Europe too? https://t.co/m0N8JjEm26

Among the roughly 3,500 Russian-linked ads House Democrats released this week were several that targeted teen girls, and asked to install a Chrome extension that gained wide access to their Facebook accounts and web browsing behavior https://t.co/sFHOD6Td6w

Inciting Civil War? More than half of the 3,500 Russian-influenced Facebook ads had explicit racial connotationshttps://t.co/HecCS68maH

“These ads were designed to stoke animosity and disagreement among racial groups.” @DerrickNAACP https://t.co/aTmuyHHI99