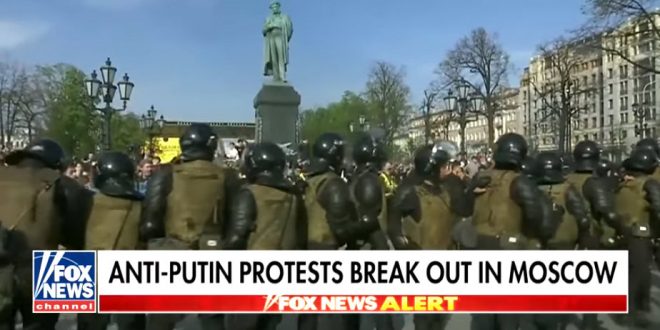 Russians angered by the impending inauguration of Vladimir Putin to a new term as president demonstrated throughout the country on Saturday. Police arrested hundreds, including protest organizer Alexei Navalny, the anti-corruption campaigner who is Putin’s most prominent foe.

Police seized Navalny by the arms and legs and carried the thrashing activist from Moscow’s Pushkin Square, where thousands were gathered for an unauthorized protest. Demonstrations under the slogan “He is not our czar” took place throughout the country, from Yakutsk in the far northeast to St. Petersburg and Kaliningrad on the fringes of Europe.

Large column of thousands of mainly young protestors marching up Nevsky prospect in St Petersburg- main chants are ‘Down with the Tsar’ and ‘Putin is a thief’ —- two days ahead of Presidential inauguration #Russia #Navalny pic.twitter.com/8Nya1HP5zO