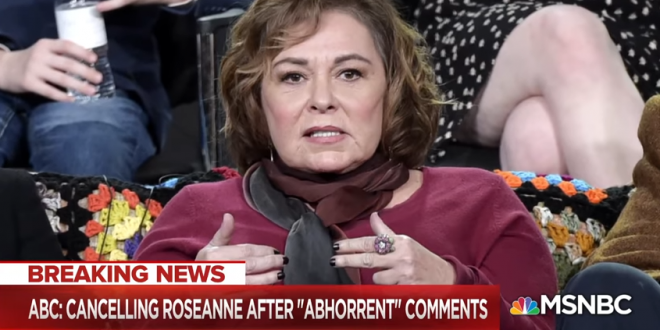 Roseanne Barr returned to Twitter after the cancellation of her ABC show Roseanne. The 65-year-old actress previously said she quit Twitter after she received backlash for a racist tweet she wrote Monday night about former Barack Obama advisor Valerie Jarrett. But late Tuesday night the star went on yet another Twitter spree, blaming her racist Tweet on using the prescription insomia drug Ambien.

“It was 2 in the morning and I was ambien-tweeting-it was memorial day too-i went 2 far & do not want it defended-it was egregious Indefensible,” she wrote. “I made a mistake I wish I hadn’t but… don’t defend it please. ty.”

However, while the actress tweeted to her supporters to not defend her she went on to retweet numerous tweets, many of which were controversial or racist, from fans defending her. She also retweeted a doctored photo of The View cohost Whoopi Goldberg allegedly wearing a T-shirt depicting a gun to President Donald Trump’s head. In reality, Goldberg was wearing a black T-shirt with the words, “And you thought I was a nasty woman before? Buckle up. Buttercup.”

The Ambien tweet and some others have already been deleted. Some of the people she retweeted last night are among the most notorious extremists still on Twitter.

I have only taken Ambien once…but I don’t remember one of the side-effects being racism.

GEORGE SOROS spokesperson responds to ROSEANNE’s claim that he turned in fellow Jews to the Nazis, while stealing their wealth: “Such false allegations are insulting to the victims of the Holocaust” & “an affront to Mr. Soros & his family, who against the odds managed to survive” pic.twitter.com/Fy1qzTt8V7