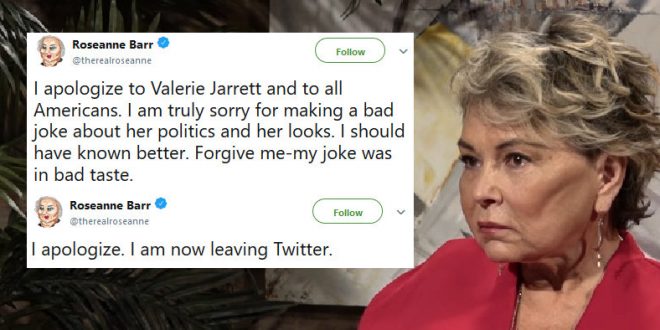 Early this morning Roseanne Barr unleashed a bizarre, conspiracy theory-filled tweetstorm in which she called former Obama adviser Valerie Jarrett the “baby” of the Muslim Brotherhood and Planet Of The Apes and declared that Chelsea Clinton is married to the nephew of right wing boogeyman George Soros.

Chelsea Clinton herself clapped back at Barr’s attack this morning, resulting in a fauxpology from Barr which included yet another insane claim about Soros.

After her tweets spawned widespread calls on social media for ABC to cancel the second season of her show, Barr has now also apologized for her “bad joke” about Jarrett, but not before retweeting a claim that Jarrett is a “commie.”

Barr is now claiming that she is leaving Twitter. Somehow we don’t think this will be the end of it.

Good morning Roseanne – my given middle name is Victoria. I imagine George Soros’s nephews are lovely people. I’m just not married to one. I am grateful for the important work @OpenSociety does in the world. Have a great day! https://t.co/mXokiTEwN7

Sorry to have tweeted incorrect info about you!I Please forgive me! By the way, George Soros is a nazi who turned in his fellow Jews 2 be murdered in German concentration camps & stole their wealth-were you aware of that? But, we all make mistakes, right Chelsea?

I apologize to Valerie Jarrett and to all Americans. I am truly sorry for making a bad joke about her politics and her looks. I should have known better. Forgive me-my joke was in bad taste.

ISLAM is not a RACE, lefties. Islam includes EVERY RACE of people.