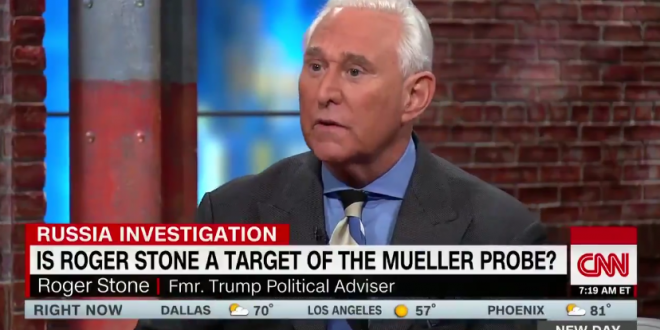 Back in 2016, CNN banned Roger Stone for a series of tweets which included calling Ana Navarro “borderline retarded.” Stone was later banned from Twitter after a tweetstorm against CNN that included calling Don Lemon an “ignorant cocksucker.” But today he was back on CNN.

Former Trump campaign adviser Roger Stone on Monday said that he has not been contacted by the team of special counsel Robert Mueller. “I have not,” Stone told CNN’s “New Day” when asked if Mueller’s team has reached out to him either directly or through lawyers.

“But for example, you read in the paper and you reported at MSNBC and CNBC that Mr. Mueller is probing my dinners with Rick Gates and my meetings with him at Trump Tower. Wants to examine the period which we worked together in the 80s.”

CNN’s @ChrisCuomo: “Have you been contacted, directly or through counsel, by anybody from the special counsel’s team?”

Roger Stone: “I have not.” pic.twitter.com/vAUxQwe0H7

Previous REPORT: White House Staffers May Quit Over Giuliani
Next State TV Backs CIA Nominee: She Should Double Down And Say I’m Proud Of My Role In Torturing Suspects