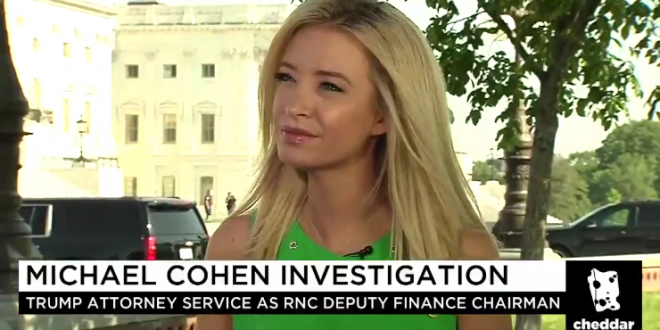 RNC spokesperson Kayleigh McEnany today confirmed that Michael Cohen is still their Deputy Finance Chairman despite weeks of revelations about Cohen’s lucrative attempts to sell access to the White House.

The RNC spokesman confirmed the news today while speaking to Cheddar correspondent and Mediaite alum J.D. Durkin. McEnany also brushed off the fact that Cohen has been raided by the FBI and is currently facing a criminal investigation over the potential campaign finance violations he committed by paying hush money to Stormy Daniels.

“You know, there’s ongoing litigation, and we’ll take it step by step,” McEnany said. “I have concerns about the violation of attorney-client privilege, and when the Southern District of New York invaded his office, swept up material, violating the President’s privacy, his clients’ privacy, Michael Cohen’s privacy. So that’s where my concerns lie.”

NEW — Kayleigh McEnany confirms to me/@cheddar that Michael Cohen is *still* Deputy Finance Chair of the RNC despite being under criminal investigation. “We’ll take it step by step, day by day,” she says. #CheddarLive pic.twitter.com/qA3xrZkdzx