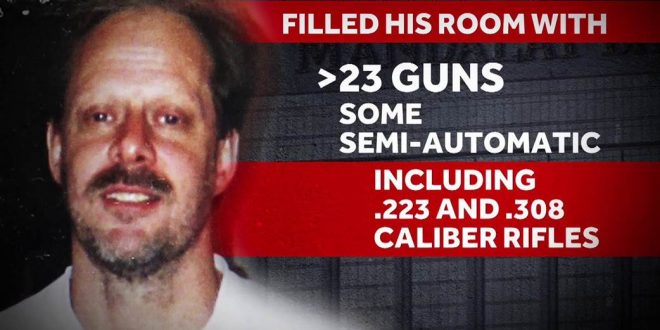 A man who says he met Las Vegas mass shooter Stephen Paddock less than a month before the Oct. 1 attack told authorities that Paddock had ranted against the government and warned that law enforcement and the military would start confiscating guns.

In a jailhouse interview with police and the FBI, the man said Paddock called Federal Emergency Management Agency “camps” set up after Hurricane Katrina in 2005 “a dry run for law enforcement and military to start kickin’ down doors and  confiscating guns.”

The man, whose name was redacted in reports released Wednesday, quoted Paddock saying somebody has to wake up the American public and get them to arm themselves. The man said he met with Paddock outside a Las Vegas sporting goods store after posting an online ad to sell schematics to convert semi-automatic guns to fire automatically.

“Somebody has to wake up the American public and get them to arm themselves,” the man said Paddock told him less than a month before the Oct. 1 shooting that killed 58 people and injured hundreds. “Sometimes sacrifices have to be made.”

In a handwritten account, a woman said she overheard a man she later said was Paddock talking with another man at a Las Vegas restaurant just three days before the massacre. She told police that Paddock seemed angry about the 1990s standoffs at Waco, Texas, and Ruby Ridge in Idaho. “At the time, I just thought ‘strange guys’ and I wanted to leave,” said the woman.

Previous Trump: Sorry Haters, I’m The Most Successful Ever
Next Alabama Gov: Those Lesbian Rumors Are Disgusting Because I’m An Anti-Gay Born Again Christian [VIDEO]