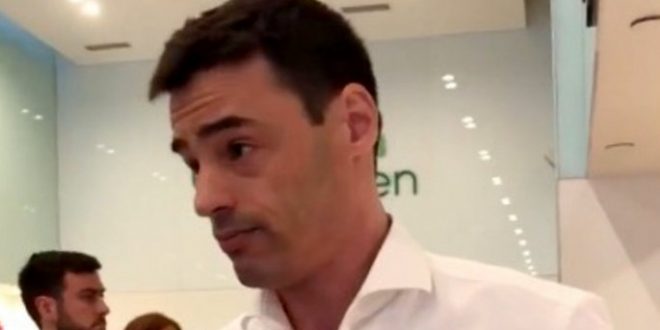 Racist lawyer Aaron Schlossberg will have to find new office space — and an attorney of his own. The 44-year-old was kicked out of his Madison Avenue work space Thursday after he was was captured in a hate-filled rant at Spanish-speaking restaurant workers — and then a Congressman filed a formal complaint to the state court system’s disciplinary committee.

Schlossberg had been using a business center in 275 Madison Ave. as an office address for his private law firm — but has been given the boot over the shocking video that went viral Wednesday.

“We have terminated his services agreement with us,” Hayim Grant, the president of Corporate Suites, which operates the business center, told The Post Thursday, adding that he was “completely shocked” by the nearly minute-long clip.

This is Aaron Schlossberg running from reporters.

Happy to report that after watching this 16 times, I still laugh just as hard. pic.twitter.com/g72Dw5p0rq

EXCLUSIVE: Just happened – I confronted Aaron Schlossberg outside court in Queens. He surprisingly had nothing to say about his racist rant. This is the FIRST time we see him after he went viral. @PIX11News pic.twitter.com/e1T6S4kLTU

Aaron Schlossberg calls NYC 911 for rescue while hiding under umbrella from reporters.#AaronSchlossberg pic.twitter.com/ZpZQNwYoS8

Hayim Grant, the president of Corporate Suites, tells BuzzFeed News the company has terminated its agreement with attorney Aaron Schlossberg, who used the company's work space on Madison Ave as an office.