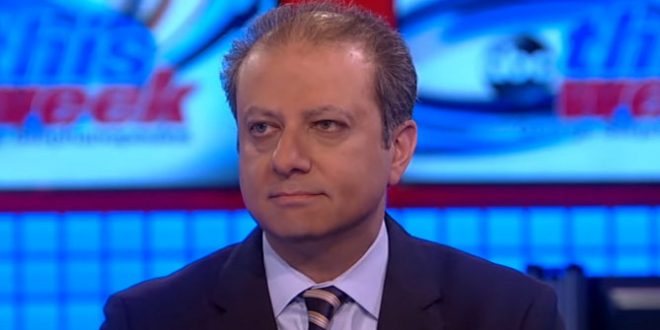 Ex-federal prosecutor Preet Bharara, while not in the race for state attorney general right now, won’t entirely rule out a run. The corruption-busting Bharara, speaking on his podcast, shared his unease with politics while leaving himself some wiggle room in the contest to replace disgraced Eric Schneiderman.

“The question about what I’ll do in respect to the election in November, that’s for another day,” said Bharara. “That said, I think politics is not really for me but it is an important job. So we’ll see. Frankly, I will tell you I don’t know that I want that job. I’ve said many times that politics is not my cup of tea. It’s not.”

Previous Convicted Felon Oliver North: The NRA Is The Victim Of “Civil Terrorism” Worse Than During Jim Crow Era
Next Todd Starnes: The Radical Revolutionary Boy Scouts Will Soon Eliminate The Name Of God And Welcome Atheists