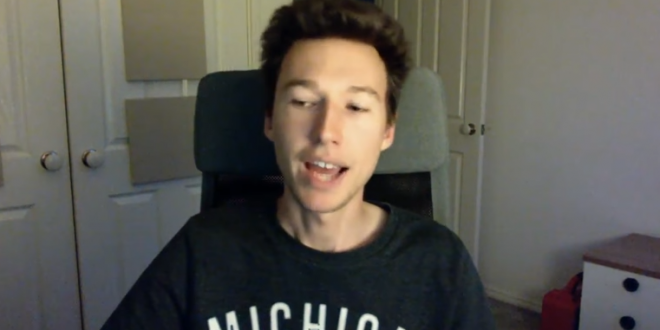 As longtime readers know, over the last decade I’ve posted many of Australian musician Nick Bertke’s truly amazing videos and even blogged about his ten-year banning from the US in 2011 for not having a valid work permit. Berkte’s clips typically get many millions of views.

Bertke originally posted his innovative compositions on a YouTube channel titled “Fagottron” – leading many, including myself, to conclude that he is gay. After his work remixing Disney’s animated classics drew widespread acclaim, Bertke was hired by Pixar and Nickelodeon and began posting under the name Pogo.

But in an unlisted YouTube clip going viral today on Reddit, Berkte explains that he named his first channel Fagottron because it was the worst thing he could think of to call gay “abominations” – who are, to him, disgusting sissies.

Bertke also declares that he found the Pulse massacre to be “fantastic” and punctuates that sentiment with a fist pump. JMG reader Javier tips us that Berke has quite the history of consorting with far-right personalities.

If Nick Bertke still has that gig with Pixar, we’re guessing that job won’t be around much longer after this.

UPDATE: I’ve been advised that Bertke was contracted by Pixar’s marketing department to create promotional videos for several films and was not their employee in the traditional sense of the word. Therefore I’ve removed Pixar’s name from the headline of this post.

Previous Mexico Hits Back At Trump With Tariffs On US Goods
Next D’Souza Mocks Bharara: You Got Fired, I Got Pardoned