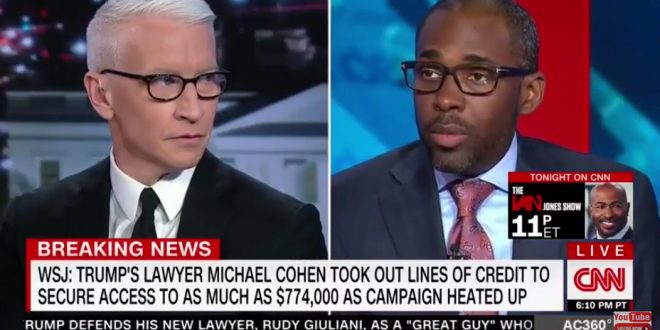 USA Today’s Kirsten Powers told the panel, “I don’t know which Trump supporter I was sitting with, and we were all told that we were insane that we thought Michael Cohen was lying.”

“We were all told we were completely crazy,” she continued, facing Trump supporters Jason Miller and Paris Dennard. “And honestly, I think you’re doing it again.”

“First of all,” Dennard said, “the president didn’t lie.” Incredulous, Cooper asked the Trump supporter if he’d ever heard the president lie. “Off the top of my head,” Dennard responded, “I can’t recall.”

Cooper then pressed Dennard about Trump’s lies about millions of illegal voters. Dennard, who is definitely not a gay homosexual, deflected to Hillary.

Paris Dennard just said on national television that he has never heard Donald Trump tell a lie. Are you kidding? Trump spent 5 1/2 years lying about Pres. Obama’s birth certificate, and the Washington Post has documented more than 3,000 lies Trump has told since taking office. pic.twitter.com/nWre0LNLOK

Listening to the Judge in the Manafort trial it is clear there is overreach, a witch hunt, it’s not about justice or Russia it’s about a political hit job out to undermine President @realDonaldTrump and get him out because they are still upset he won & doing a great job. #MAGA

Previous Judge Questions Mueller’s Motives In Manafort Case: You Don’t Care About Fraud, You Want Him To Sing
Next Fox News “Catches Up” With Kim Davis [VIDEO]