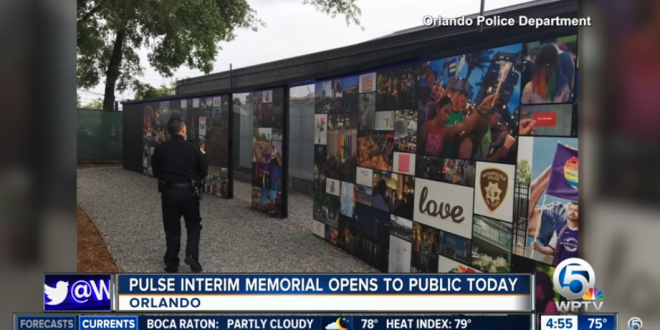 The onePULSE Foundation is unveiling the Orlando nightclub’s “interim” memorial today, designed to be a temporary tribute to the victims and survivors of the 2016 mass shooting. During a dedication ceremony this morning, Pulse nightclub owner and onePULSE Foundation founder Barbara Poma thanked local companies that contributed to the project. She also praised the survivors and family members of victims who helped guide its design. “They gave selflessly to make decisions for those who could not,” she said.

From the onePULSE Foundation:

As part of the interim memorial design, the iconic Pulse sign has been enhanced and a new fence placed around the perimeter of the nightclub itself. It will remain standing until the permanent memorial and museum designs are selected. Along the fence, features, including panels and murals, honor the 49 angels who were taken and commemorate the days following the tragedy when Orlando and supporters around the country and throughout the world came together to grieve and support the families, survivors and first responders. The iconic Pulse fountain, which had been destroyed by gunfire, has also been restored.

Preview of the interim memorial at Pulse nightclub. It will be open to the public starting at 3pm. pic.twitter.com/RlPxGu8Mov

Here is a sneak peek of the new interim Pulse memorial. It opens to the public today at 3PM. @MyNews13 pic.twitter.com/Dqlfb10H8k

A very emotional day in #Orlando as the @onePULSEorg interim memorial is unveiled. https://t.co/jALeH3QC55

Families, survivors, first responders, & civic & spiritual leaders gathered to dedicate the opening of the #Pulse interim memorial, which will provide a place for commemoration & reflection. The public can visit today starting at 3 pm. #WeWillNotLetHateWin https://t.co/F9XKBKL5xA pic.twitter.com/xmXCuor7Wh

Barbara Poma, owner of Pulse and CEO of @onePULSEorg, offers her thanks to everyone involved in the interim memorial process. pic.twitter.com/gYw6akjaIW

TODAY: Survivors and family will get the first look at a the new temporary memorial at Pulse. A place to honor 49, a place to give hope. @MyNews13
(Pic: @JerryHume ) pic.twitter.com/QswrAYspEG

Previous Trump Tells Macron US Will Withdraw From Iran Deal
Next Don Blankenship Embraces “Bigot” Charges In Final Ad: Even If It’s True, I’ll Still Do A Better Job Than Others