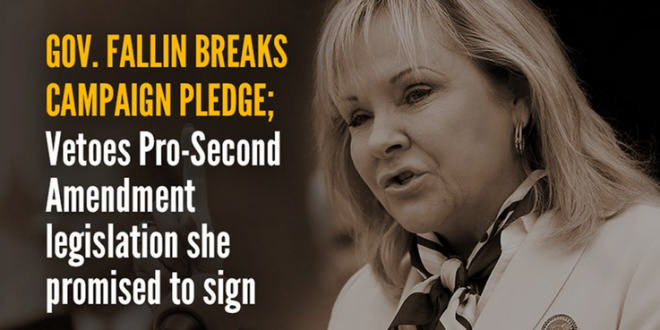 Oklahoma’s Republican Gov. Mary Fallin vetoed a bill late Friday that would have authorized adults to carry firearms without a permit or training, dealing a rare defeat to the National Rifle Association in a conservative state.

The veto comes after opposition from the business community and law enforcement authorities, including top officials with the Oklahoma State Bureau of Investigation who have said it could erode public safety. The NRA had supported the bill’s passage and had urged Fallin to sign it.

“Gov. Fallin vetoed this important piece of self-defense legislation despite the state legislature’s overwhelming approval of the bill and her commitment to NRA members to support constitutional carry when she ran for reelection. Make no mistake, this temporary setback will be rectified when Oklahoma residents elect a new, and genuinely pro-Second Amendment governor.”

RELATED: Also yesterday Fallin signed a bill allowing state-funded religious charities to deny adoptions by same-sex couples. The law is the first anti-LGBT bill enacted in any state this year. A similar bill is on the governor’s desk in Kansas.