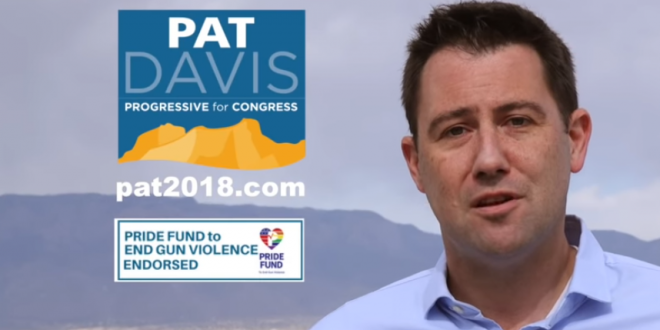 A Democratic congressional candidate is out with a new TV ad using far more explicit language than the usual political spot. “Fuck the NRA,” Pat Davis says in the 15-second ad. “Their pro-gun policies have resulted in dead children, dead mothers and dead fathers.”

Davis is an Albuquerque city council member running for the Democratic nomination in New Mexico’s 1st Congressional District, and his provocative spot is an attempt to distinguish himself in his crowded primary.

It’s a six-way contest, and fellow Democrats Deb Haaland and former U.S. attorney Damon Martinez are considered the front-runners. If Haaland wins, she would become the first Native American woman elected to Congress.

From his “Meet Pat Davis” page:

Today, he’s a city councilor where he’s pioneering a new citywide solar energy project to fight climate change and keep our children and grandchildren here in clean energy jobs, instead of having to leave New Mexico for work.

In 2009, Pat ran for Sheriff in Bernalillo County. He received a lot of attention for running as an openly gay man, but a Tea Party wave swept Gov. Martinez into office along with a new dynamic for New Mexico politics.

The ad below ran yesterday on Albuquerque’s CBS affiliate, preceded by an “inappropriate language” warning. The station’s manager says they were forced to run the ad as-is because by law they are not permitting to censor or edit political ads.