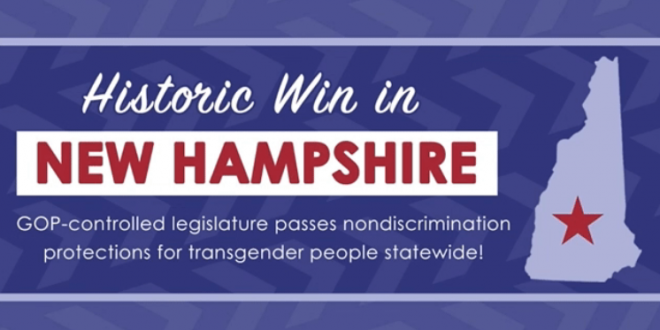 Via press release from Freedom For All Americans:

In a legislative victory two years in the making, the New Hampshire Senate, by a bipartisan vote of 14-10, voted in favor of a bill, HB 1319, that adds transgender-inclusive nondiscrimination protections to the state’s existing civil rights law. The bill now heads to the desk of Republican Governor Chris Sununu, who confirmed almost immediately through a spokesperson to reporters that he will sign.

With this historic vote – and previous passage through the Republican-led House earlier this month – the Granite State will soon become the 19th in country to enact statewide comprehensive nondiscrimination protections in housing, employment, and public accommodations for all LGBTQ people, should Governor Sununu sign. As a result, New Hampshire becomes the first state since 2016 with a proactive victory on LGBTQ nondiscrimination protections.

We STILL don’t have this in New York. New fucking York!

BREAKING: NH Senate votes to pass #HB1319 #TransBillNH 14-10 that would update anti-discrimination protections to include transgender folks across the state!! On to the @GovChrisSununu‘s desk for signing. #NHPolitics pic.twitter.com/XvxUhKgYkY

4,950 transgender adults and teens in New Hampshire will now have statewide protection against discrimination. https://t.co/hTQIAcO2sT

Now the bill heads to Gov. Chris Sununu (R), who has indicated that he will sign #TransBillNH and turn it into #TransLAWNH! We’re grateful for the strongly bipartisan array of lawmakers who voted YES to protecting #transgender people from discrimination. https://t.co/mmb8i7fR5F

Very thankful for the activism of my son, @transrigo, + so many others, like these volunteers, in passing #HB1319 thru #NewHampshire legislature. This bill moves us a step closer in protecting #transgender Americans. We must keep fighting to ensure #EqualityForAll. #TransBillNH pic.twitter.com/HgnKNqpE1X