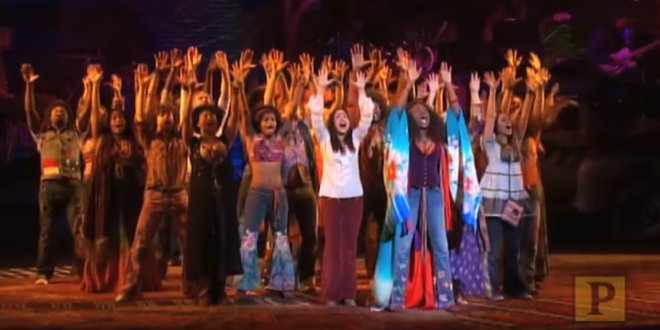 NBC’s Next Live Musical Will Be Hair

Don’t hold your breath for the show’s famous nudity to make its way to broadcast television, but NBC has chosen Hair as its next live musical.

The network on Thursday announced that the 50-year-old Broadway hit of the hippie generation will be its latest live staging, with plans for a spring 2019 telecast. That fills the void left by the twice-delayed staging of Bye, Bye Birdie , which star and executive producer Jennifer Lopez recently revealed to The Hollywood Reporter is still on the back burner.

Like the network’s stagings of The Sound of Music, Peter Pan, The Wiz, Hairspray and the recent Jesus Christ Superstar, Hair will be executive produced by Craig Zadan and Neil Meron — in association with Universal Television and MGM Television.

It’s been more than half a century (!) since the American tribal love musical first hit the Broadway boards, debuting at the Biltmore Theatre in April 1968 — six months after its off-Broadway bow as the inaugural production of Joseph Papp’s Public Theater.

With music by Galt MacDermot and a book by James Rado & George Ragni, the show had an initial four-year run on the Great White Way and has been revived there four times since, most recently in 2011.

The musical inspired a 1979 movie by Milos Forman — his follow-up to One Flew Over the Cuckoo’s Nest, the 1975 pic that earned him his first Oscar for Best Director. The Hair film cast included Treat Williams, Beverly D’Angelo, and John Savage.

Previous REPORT: Trump Made Stephen Miller And Jared Kushner Laugh With Made Up Names Of Hispanic Criminals
Next FBI Warns Of Russian Malware: Reboot Botnet Devices