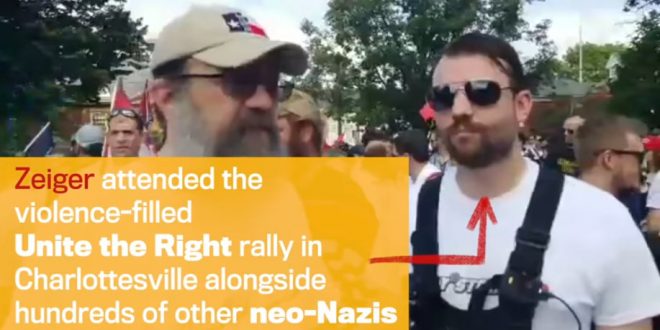 One of North America’s most influential neo-Nazis lives in Montreal and is organizing a white supremacist network on the island.  Zeiger” is the pseudonym for the second-most prolific writer on the Daily Stormer, an extreme right-wing news website that attracts upwards of 80,000 unique visitors a month.

The site traffics in conspiracy theories, refers to African-Americans as “nogs,” to gay men as “f***ots” and devotes coverage to what it calls the “Race War” and the “Jewish Problem.” Along with the Daily Stormer’s other authors, Zeiger has helped spread this ideology to a new generation of young white men across North America. Since emerging as a key figure in the movement four years ago, Zeiger’s identity has been a closely guarded secret. But an investigation by the Montreal Gazette has linked Zeiger to a local IT consultant in his early 30s.

Gabriel Sohier Chaput lives in an apartment in Rosemont-La Petite-Patrie. That same apartment was listed by Zeiger as his home and as a rendezvous point for a local neo-Nazi group, according to documents obtained by the Montreal Gazette.

Chaput’s work is revered by several terrorist organizations linked to violence, including Atomwaffen Division (AWD), a terroristic, national socialist organization that formed out of Iron March. Chaput was AWD’s primary publicist and helped the group rise to prominence by regularly promoting it on the Daily Stormer.

New and longtime white supremacists continue to find value in his enormous catalog of work. Because of this, he is one of the most effective strategists active in the North American far right. In a podcast titled, “This is the Plan,” released on May 19, 2016 — 9 days after his first byline at the Daily Stormer, Zeiger spoke at length about creating effective propaganda and the importance of developing an internal culture for young recruits.

There’s MUCH more at both links above.